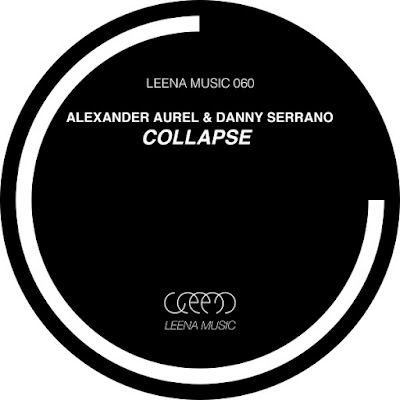 ‘Collapse’ is the 2nd release on Leena Music from German producer / DJ Alexander Aurel, who teams up with Danny Serrano on this intoxicating EP. ‘Collapse’ is a bubbling Techy groove brazen with dramatic beats and dark synth attacks that penetrate the effervescent bass hook, giving way to a combustible breakdown. Also on the package Alexander and Danny each deliver a solo production – Alexander’s ‘Jupiter’ is powerful creation where brooding synths, ethereal vocal stabs and haunting melodies percolate over a high-hat driven House groove. Danny’s ‘Twin Peaks’ is an upbeat groove that bobs and weaves around an infectious melody hook, teased with pressure points to create the right amount of tension to detonate the dance floor!

“I made a remix for Danny on My Favourite Freaks in October 2015. He was happy with my work and he had the idea of doing a collaboration together and eventually ‘Collapse’ was born! ” – Alexander Aurel

Germany’s Alexander Aurel’s sound crosses a wide musical spectrum, transcending the percussive, the melodic and the damn right groovy! His sublime sound, paired with an open mind congenialness and ability to connect with the crowd has paved a way for an already successful DJ career. His early beginnings include a long-term residency at the famous U60311 in Frankfurt, along with his residency at Electric Grooves at Tanzhaus West Frankfurt and the ‘Großstadtliebe-Openairs’. Alexander is currently resident for the hip ‘As You Like it’ events in Frankfurt, where he plays together with DJ Karotte, as well as guesting at events such as the Rave On Snow Festival, Watergate Berlin, Tanzhaus West Frankfurt, Romy S Stuttgart, Harry Klein Munich, Kater Blau Berlin, Distellery Leipzig and Thai Break – his diary has certainly been busy! Aside of his Djing commitments Alexander dedicates precious time in the studio for his productions, making his debut release back in 2010 with ‘Funk That EP’ on Frequenza Limited. His musical works have since graced cutting edge underground dance labels such as Mobilee, Terminal M, 8bit, Frequenza, Leena Music and Harthouse, among others, with new releases forthcoming on Material.