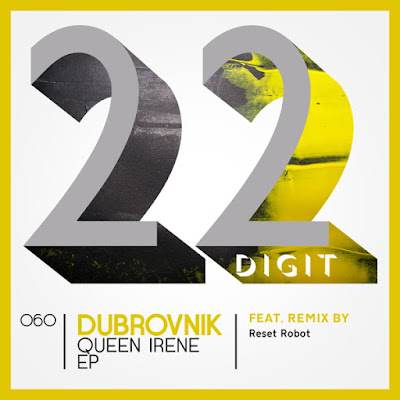 22 Digit Records is a UK based label with an open minded music policy that’s focused towards House music, but incorporates elements of Techno and other electronic genres.

Following a release from Alland Byallo the new 22 Digit Records release is from Dubrovnik (UK) who is a fresh new talent based in the Scottish city of Glasgow, which is a location that’s previously spawned labels like Soma plus artists like Slam and Jackmaster.

Dubrovnik (UK) appears after a release on Flashmob’s self-titled label and this is only his third official release. Complimenting the two originals on this release is a remix from Reset Robot.

Not just a solo producer Reset Robot also regularly collaborates with Alan Fitzpatrick under the alias of Customer.

“Rene” is led by a thick lead pad which glides through the track’s stripped back percussion to provide its driving force. Chic in every sense of the word, this is a fine example of how less can so often be so much more. The structure is Techno influenced, but the style of the groove is more commonly associated with House music, making this dancefloor track the perfect hybrid.

Reset Robot’s remix of “Rene” keeps the originals minimalistic but adds his own subtle melody to replace the originals dominant lead synth. Building with complexity as the track develops, he adds sounds which create a more spacious sense of atmosphere. Deeper and more abstract than some might expect from Reset Robot, this intelligent remix shows off his versatility as a producer.

“Block” has a tough groove lead by a dominant kick drum and prominent clap sample. Murky and mysterious, a muffled synth stab and textured FX lay a foundation for the fragile melody to sit. Driven by the rich stabs of the polished lead sound, this club friendly track is the pinnacle of sophistication.

Next Of Kin – Everything