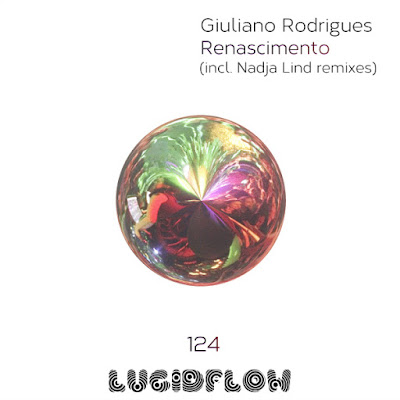 Brazilian Giuliano Rodrigues come in for release #124 on Lucidflow, and it is a release that has a touch more poignancy than usual. While Lucidflow’s A&R approach is often very open, creating ties as co-owners Nadja Lind and Helmut Ebritsch tour the world, Renascimento can be traced back to the roots.
Renascimento is the name of a bar in Buzios, Rio de Janeiro. After a fire, it was bought out and renovated by its owner DJ HELP. Under her stewardship, this was the first ever venue Giuliano played at in public, road testing many of the early Lucidflow releases. A story born from fire, like the mythical phoenix.
Giulano himself has been releasing since the mid-2000’s, earnestly amassing over 300 releases on his own Movement Music imprint. Showing a full multimedia mindset, he often cuts his own videos for artists, including many of the Lucidflow family.
Here, we see his production nous in full swing, with the dark and tumbling ‘Connecting Minds’ leading the way. Full of pace, it is seared with filtering midrange, cutting across the middle distance melodies like forked lightning across the sky.
‘Renascimento’ itself is much more languid, easily conjuring up the sun thrashed afternoons of Brazil. It builds itself up only to tear itself down over an elongated breakdown. Not laid back enough? Then the ‘Ultra Slow Mix’ hits half tempo to really emphasise the dub angle, almost utterly timestretched in its approach.
Nadja herself takes the chance to exercise some adrenaline, taking on the rumbling ‘Connecting Minds’. In ‘Club Remix’ guise, it works the tease angle by using a single first beat kick as the lynchpin for the extended intro. Post-break, it is in with the four to the floor and almost trance edged melodies take you right out into the cosmos. In an alternate take, the ‘Ludid Moment Remix’ uses the same structures and conceits, but at a much lower tempo and intensity. Rather than a rush to the stars, it’s a rush to the beach.
The Renascimento EP releases on 30st January 2017 and the Nadja Lind remixes will feature Native Instruments’ STEMS format for the tweakers.