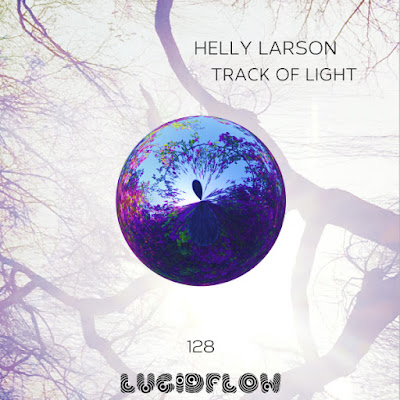 Frequent Lucidflow guest Helly Larson returns for release #128 with ‘Track Of Light’. If you’ve not checked in on the Berlin based producer to date, then pause in your tracks and make this the first stop. Offering pure petrichor vibes, this is a strong one cover to cover.

Kicking off with ‘Feel It In Your Soul’, the faint analogue hiss in the background paints a canvas of a light springtime shower. A sole chord plays on every bar while a vocal loses itself drenched in delay and reverb. Following this, ‘Track Of Light’ executes groove mentality perfectly. Its wriggly bassline weaves its way through swinging beats, letting a twanging melody work its magic over the top as wind rushes drive intensity in all the right places.

Edging the tempo down ever so slightly, ‘The Way Of The Deep’ cleverly plays off a dub phrase in each ear, before a third takes centre stage over the main break. The varying degrees of echo tickle the senses beautifully. Finally ‘Deep Water’ bookends the release perfectly, mirroring the gentle drizzly hiss of the opener, the single chord and rippling dub notes. A familiar re-treading that has a more minor sense of reflection befitting its place in the position of closer.

Coming early to Beatport on 13th March, this will be available with wider circulation on 24th April.

X Gets The Crest – What Ya Gonna Do?