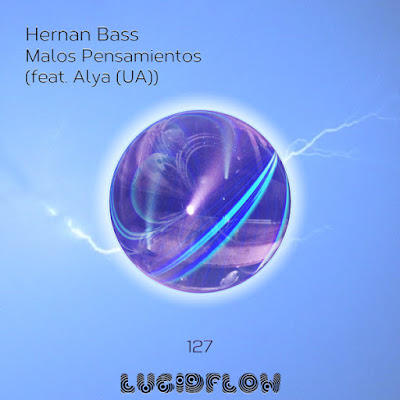 Lucidflow’s 127th release comes from Buenos Aires based producer Hernan Bass. As owner of Krad Records, he manages to fit in a worldwide touring schedule as well as helming slots on a variety of esteemed radio shows. This tireless ethic has seen his releases span labels such as Innocent Music, Little Helpers, Baile Musik and a significant amount more, with tracks finding their way into both physical shops and right into the top 50 best selling artists of the minimal and deep tech genre at Beatport.
And this sums up his latest release for Lucidflow ‘Malos Pensamientos’. It’s a collection of groove led tracks embued with summer heat, which will no doubt be a welcome sound for souls that have started to notice daylight creep further and further into the night-time sky as each day passes.
The title track heads for the groove and drop structure. Intricately and astutely mastered beats cleanly power the track, the bassline providing fuel. Classic rhythmic drops are punctuated with chord stabs and a rising chord, subtly raising the drama before heading back to the groove.
Next is ‘Lorenzo’ and what you’ll pick up most here is the “anger has a place… In all of this” and the nifty rimshot that pierces the track like a particularly prominent metronome. Again, the drops keep driving the intensity, powering through the track like a freight train.
Next up is ‘Francia o Muerte’, which teams proggy bass stabs, frozen chords and bubbling percussive tones to create a real gear shifting tool. Then ‘Feeling Wrong’ ties off the release with a more emotive moment, punctuated by the smoky whispers of Alya UA and cresting bluesy textures.