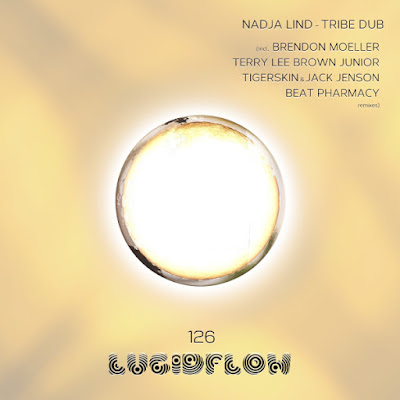 Lucidflow make a ninth journey onto wax with label co-owner Nadja Lind’s ‘Tribe Dub’, and no punches have been pulled with the array of top drawer remixers on board featuring Brendon Moeller, Tigerskin & Jack Jenson, and Terry Lee Brown Junior – plus an additional digital only remix from Brendon Moeller in Beat Pharmacy guise.
Nadja’s original fires on all cylinders with a frantic sub-bass assault that isn’t going to be happy unless your lungs have been thoroughly bruised by a main room’s speaker stack. As the bass tumbles, phasing dub stabs gracefully arc into the stratosphere and back again.
Production veteran Brendon Moeller steps up first on the mix with an interpretation that plays on the dancing dub elements of the original. A bare percussive anchor runs through the track allowing the rest of the elements to waltz around it in a shimmying and synchronised display. As Beat Pharmacy, Brendon goes straight for the techno jugular, rolling out crackling hi-hats and a straighter groove that stretches out like taut elastic.
Usually present under the Dub Taylor guise, Tigerskin adopts his main identity in tandem with Jack Jenson to bring a bit of dreaminess to the dance floor thunder of the original. Here, the elements are whispered, like the hush of walking out on a first light and frost covered morning. As the frozen pads thaw out, you emerge from the countryside into the hustle and bustle of the city, with apt field samples layering over the subtle and insistent groove.
Plastic City head honcho Terry Lee Brown Jnr is given the task of tackling Nadja’s stellar ‘Ignore And Block’. Like Tigerskin & Jack Jenson before it, the theme here is frozen melodies over precisely deployed percussion. Anyone familiar with his work will immediately find them at home in the deep-but-tech groove laid out over the track.

Coming out in 22nd Feb. 2017, the release will surface on smouldering orange marbled vinyl.

Fabio Papa – One Of Those Nights EP