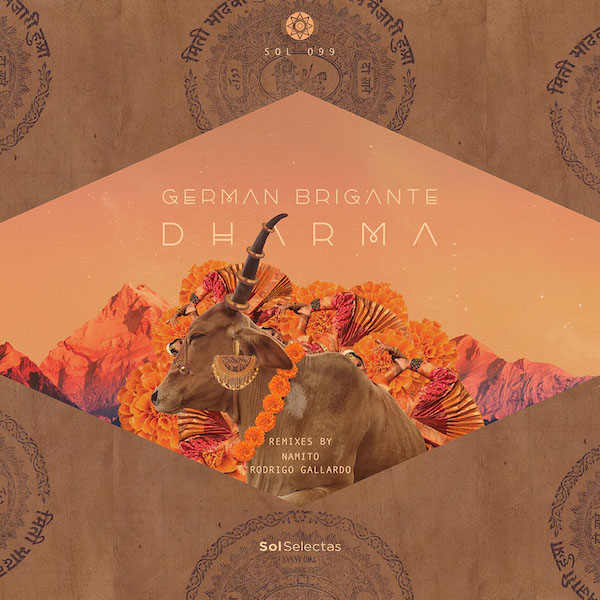 Sabo’s record label Sol Selectas closes out 2022 with an organic house EP by German Brigante which alongside his four originals, also includes remixes by Namito and Rodrigo Gallardo.

Based in Spain, German Brigante is a skilled producer and accomplished DJ whose eclectic style includes releases on labels ranging from Get Physical Music to Diynamic. Recently he has been focusing on melodic grooves with organic sounds and has become a regular feature of Sol Selectas along with other genre-defining organic house labels such as Bar 25 Music and Monaberry.

Namito has been Sol Selectas favourite ever since the release of his chart-topping track “Stone Flower”. He is a Persian artist whose enchanting melodic style has been signed to other scene-leading imprints including Katermukke, Do Not Sit, Bedrock and Selador.

Rodrigo Gallardo is a Chilean artist who blends traditional instruments from his country’s folk law with electronic beats and intricate synth melodies. He has previously featured numerous tracks on Sol Selectas’ Summer Sol compilations and has also released music on other imprints such as Cercle Records, Cafe De Anatolia and Underyourskin Records.

“Mahesha” is a percussive track with aerobic strings and a plodding bassline combined with ceremonial vocals to create a mystical vibe with a dance floor focused energy.

“Khooli Rah” is a cinematic track with epic strings and uplifting melodies combined with flowing percussion and a Punjabi vocal underpinned with a pulsating bassline.

“Parvati Maa” has dramatic bass chords layered with a sensual vocal, fluttering strings and pitched percussion that adds to its irresistible melodic groove.

First of the remixes comes from Namito who delivers a techy remix of “Parvati Maa”. A raised tempo and looped groove combine with snippets of the original vocal and a psychedelic breakdown section that builds spine-tingling suspense before dropping into a breakbeat section.

“Rabba” is a downtempo track with a chugging groove and mesmerising Indian vocals that are fused with poignant melodies to create a sun-drenched vibe that radiates heat.

Closing the release is Rodrigo Gallardo’s remix of Rabba, which adds a sitar and other instrumentation after switching out the bassline and stripping back some of the original’s percussion to create a more atmospheric version.

Helia Jmaali’s artwork glorifies the sacred cow of India, with colourful flowers and dancing spirits in the sun-soaked mountains. 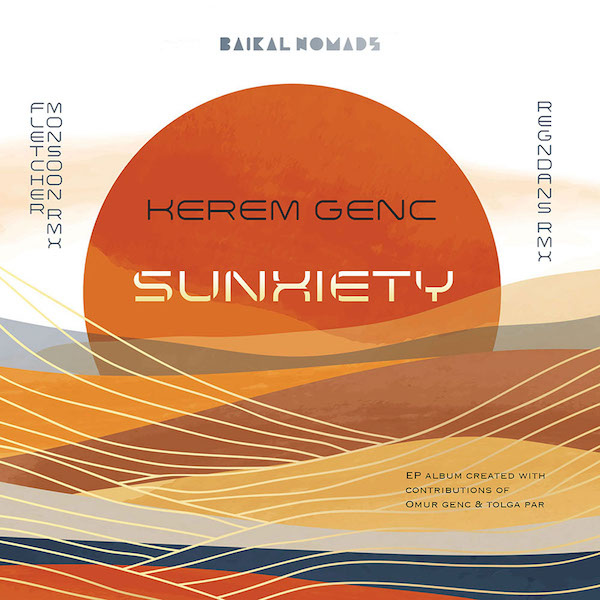 Kerem Genc is making his fourth appearance on Baikal Nomads, but this is his first solo EP following a previous remix and numerous tracks on VA releases. He has also dropped his enchanting style of chugging organic house on other record labels ranging from Kosa to Cosmic Awakenings.

Regndans is a Swedish artist from Malmö who returns to Baikal Nomads following his EP on the label in 2022. He drops a trippy remix in trademark style he has also featured on other imprints including the likes of Shango Records, MONADA and House Music With Love.

Fletcher Monsoon is back on Baikal Nomads with their second release for the record label and it’s an uplifting track with a smouldering groove and undertones of funk. They are a duo of Israeli artists from Tel-Aviv who have worked with other record labels including Cafe De Anatolia and Ohxala Records.

“On My Own” is first of the two originals and its sun-drenched groove is a fusion of psychedelic guitar chords, gritty vocals and a chugging bassline. The flowing percussion gives the track a dance floor energy that will captivate any audience.

Regndans’ remix of On My Own strips out the guitar and gives the vocal room to breathe, which gives it a haunting atmosphere. He also chunks up the percussion and bassline to give it a thicker sound to ensure that it loses none of its energy.

“Aurora” has a jazz-inspired groove with sleazy trumpets and a plodding bassline combined with intricate synths and key stabs. Its mesmerising groove is full of musicality with a steady momentum that will move mind, body and soul.

Fletcher Monsoon brings out the original’s live instrumentation to give his remix of On My Own a feel-good vibe. They also add some additional percussion and a trippy vocal sample along with some funky guitar chords to create a masterpiece of a rework. 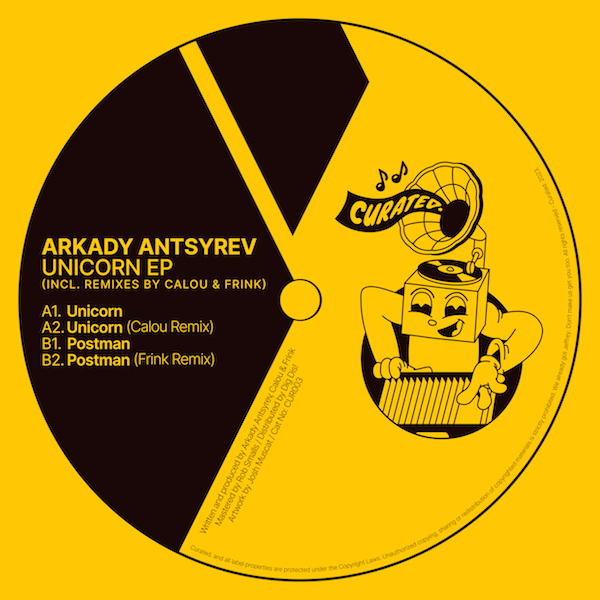 Black Sea Side Music label boss Arkady Antsyrev is the next artist to feature on the recently launched subterranean imprint Curated. He turns in an impressive offering of his signature deepened bumpy style across two undeniably groovy original cuts joined by sought-after underground talents Calou & Frink with a pair of standout remixes.

Opening with the title cut, ‘Unicorn’ is an instantly funky affair filled with swinging rhythms and punchy grooves. An analogue-heavy vibe-builder centred around a hooking bassline melody and playful synth stabs, its relentlessly danceable energy and silky harmonies carve out a captivating feel-good vibe from start to finish.

Calou comes next with his remix of ‘Unicorn’, with added emphasis on melody and emotion. Flooding the mix with layered synths, pads, stabs and lucid vocals, it takes you on a gliding journey full of touching riffs and atmospheric licks to get lost in on the dancefloor.

‘Postman’ follows, pulling you back into thickened beats and dreamy soundscapes. Potent drum work and crisp percussive flair drive the track forwards through a sea of resonant frequencies and shuffled grooves, accented by creative fills and bolstered by another weighty bassline melody. This one is a real toe-tapper!

Frink’s remix of ‘Postman’ rounds off the release with another impressively unique spin. Rolling grooves and pulsating melodics lead the way through a sea of progressively velvety musicality as the track continues to lead you down the rabbit hole in this captivating late-night number. 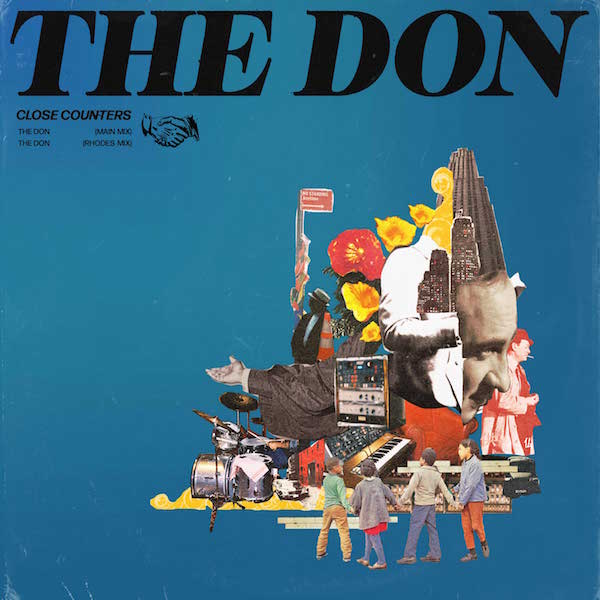 Dropping in once more after releases on Defected x The Remedy Project, Naarm/Melbourne-based Close Counters continue on their exploration of electronica on ‘THE DON’, marking the final single ahead of their eagerly awaited ‘SOULACOASTA II’ album due out early 2023.

A deep slung bassline cruises through the off-kilter percussive loops and sleek piano keys traverse through vocal snippets on this quality slice of New York-infused house. First play from Gilles Peterson on his BBC 6 Music show this week, plus support from Sam Divine, Shy One, LP Giobbi, Bugz in the Attic and Motez to name but a few…

Also included on the pack is a ‘Rhodes Mix’ on a slightly more lofi-tip, with Finn of CC reworking the sounds of the OG on his synthesiser for a more chill rendition.

The production pair have just had their track ‘Rollout’ with Young Franco added to the FIFA 23 Soundtrack and have seen widespread support from BBC Radio 1, BBC Radio 1Xtra, BBC 6 Music, Sirius XM, with ‘SNAP TO IT!’ and ‘GET DOWN!’ supported by Jamz Supernova, Folamour, Jamie Jones, Harvey Sutherland to name a few. 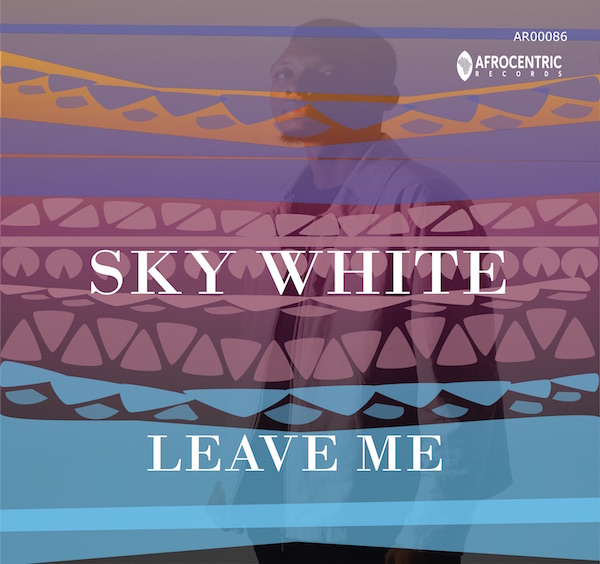 Mozambique’s Sky White has been busy carving quite a career for himself on the Afro House scene since he made his impressive debut in 2018 with ‘Zona Quente EP’ on Afrocentric Records at the tender age of 20. Fresh for 2022, Sky White reveals the first fruits from his forthcoming artist album, ‘Crossing Borders’, with a stunning 4 tracker EP titled ‘Leave Me’. The title track is an atmospheric slab of Afro-tech loaded with detailed beat wizardry, hypnotic melodies and garnished with a haunting vocal. ‘Move Like That’ is a beautiful song dipped in melancholy featuring New York’s Kastro, whose voice alluringly drifts over an emotive soundscape, which also comes with a powerful remix from Moish & Vasilis, who transport the song into the deep Afro-Tech arena. Closing out this first-rate Afrocentric package is ‘Kassina’, a slow burning pensive groove where brooding electronica meets earthy drums and stirring piano.

“Before I created ‘Leave Me’, I set the intention of creating something that would move people both physically and/ or emotionally and built the whole track around the vocal, ‘people move to the beat’. Having tried and tested it at various events in Mozambique and South Africa this year, I can safely say it does the trick!” – Sky White

Lenilson Dos Santos, aka Sky White, is a Producer, Dj and Mozambican Remixer. Starting his musical journey learning the piano at the age of 10, he began playing House Music at just 16 years old, after watching Black Coffee’s Ballantine’s Human Orchestra in 2014 and promptly learned to DJ. He honed his craft by spinning at local parties and events, before producing a selection of his own productions that were promptly signed by Afrocentric Records in 2018, which received support from big names such as: Black Coffee, Tale Of Us, Da Capo, Enoo Napa, and XtetiQsoul. Sky White is currently putting the finishing touches to his debut artist album ‘Crossing Borders’ due for release in 2023, as well as playing lots of events across Mozambique and South Africa.

‘Leave Me’ will be released on Traxsource promo on December 16th / Full release December 30th 2022 on Afrocentric Records. 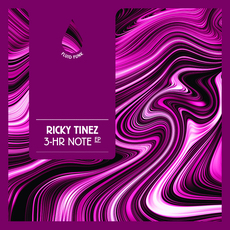 LA-based Ricky Tinez runs a popular Youtube channel about electronic music production and werks the underground warehouse parties of California with his raw and jacking sounds for deep house heads. His next effort ‘3-Hr Note EP’ drops on Fluid Funk and includes a rare remix from London vibist K15.

Title cut ‘3Hr-Note’, is a slice of tropical-hot house designed to make hips shake and heads turn as it swaggers its way across the sweatbox. It chugs and rolls with undeniable attitude, pulling off a vibrant arrangement of fluttering synths, crisp drum progs and a groove that defines Tinez to a T. In the hands of British producer K15, the track exudes a deeper jazzy take and Cuban-like percussive feel, both unapologetically groovy and sensual, and tinged with a hint of that Cali-funk infused left-of-centre-ness that is typically Tinez.

‘Ur Digits’ takes us to 70s discoid space, as Tinez injects a healthy dose of French-style filtered house manoeuvres that are straight out of Roulé’s heyday. Heavy-lidded yet energetic, this is dreamy get down boogie with a distinctly churning drive. Drowned in static-filled layers, dusty piano chords and hip-hop-laced drums come together on the sample-heavy ‘The Art’. This track wraps up Tinez’ masterclass in crafty deep house joints that merge the lush and deep harmonics of Chicago with a sense of subdued underground psychedelia. 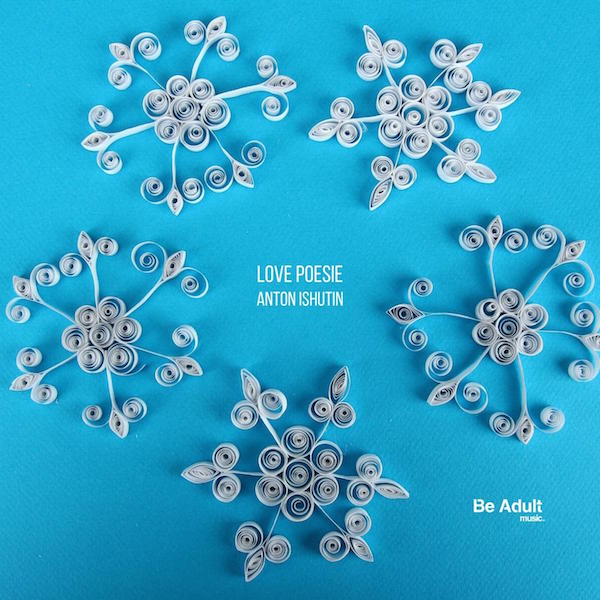 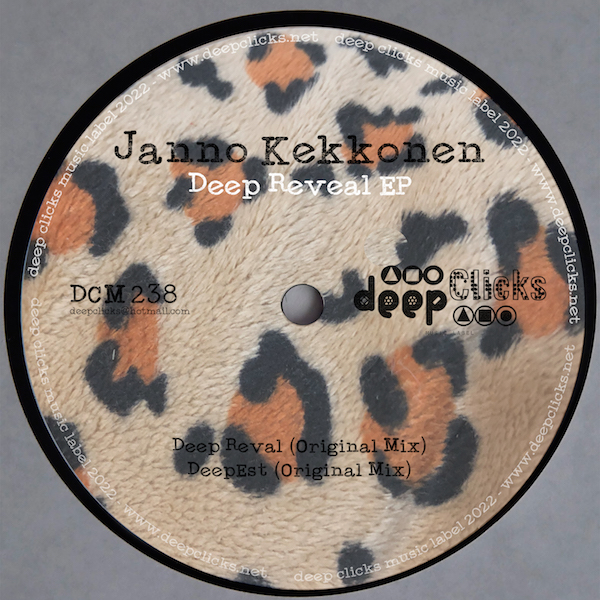 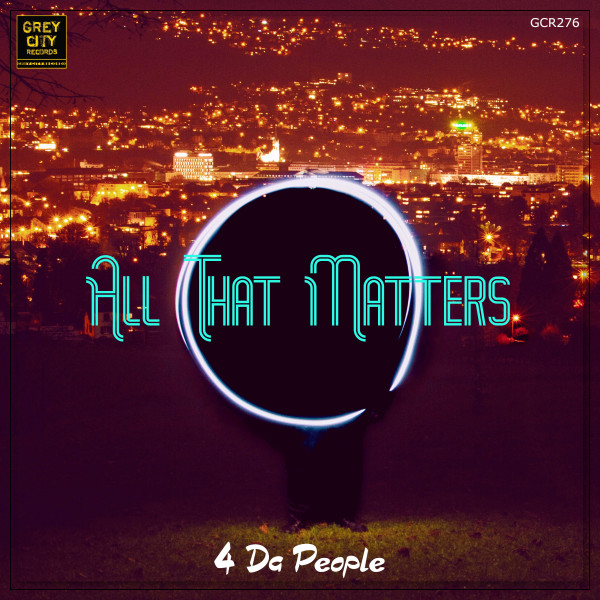 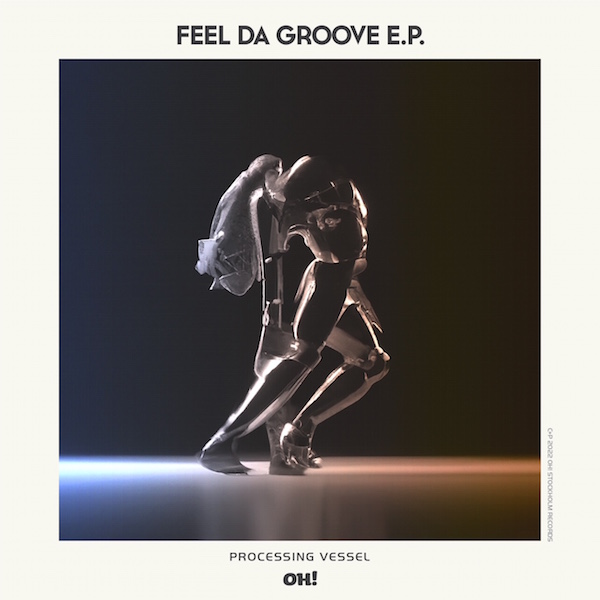 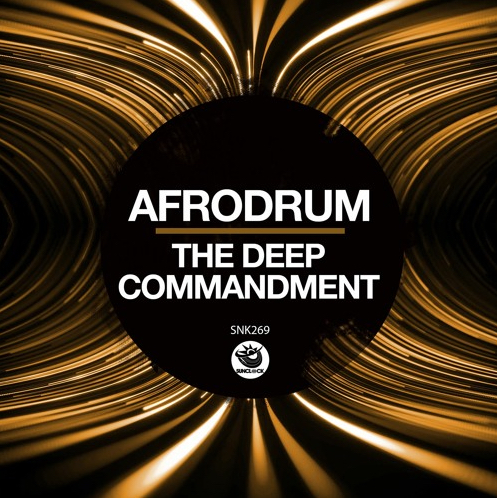 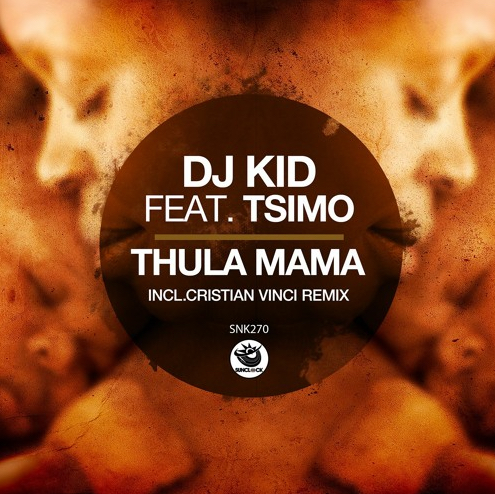 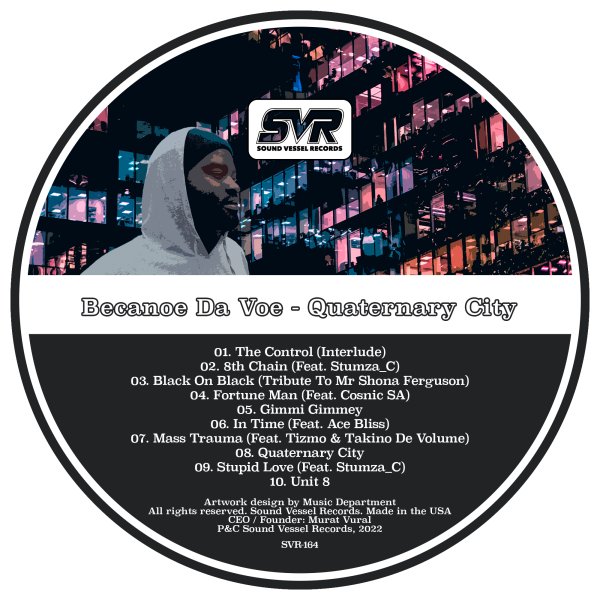 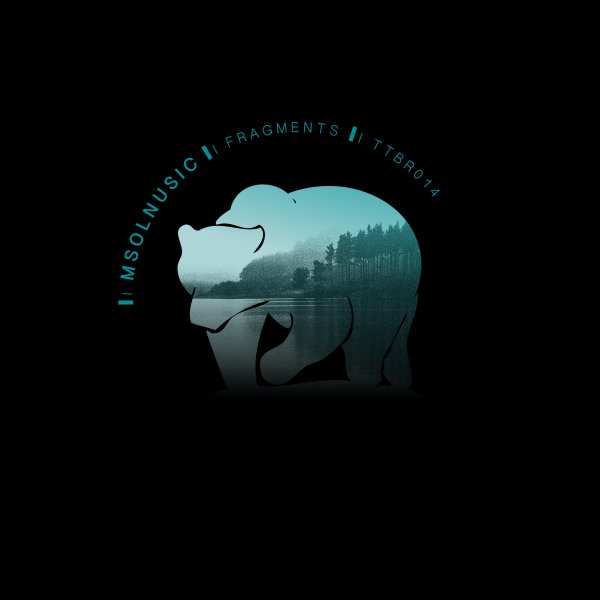