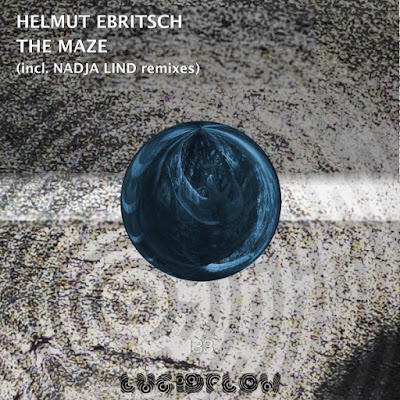 As part of Klartraum, alongside Lucidflow co-owner Nadja Lind, Helmut Ebritsch is also part of an extremely well oiled machine. However it may come as a surprise that ‘The Maze’ is our first chance to see him in solo action since 2014. What those of you may not know is that Helmut’s reach spreads further than you’d expect. Heading up Agile Mastering, his subtle finishing touch is ever-present on each facet of Lucidflow’s output. What this translates to is an exacting approach to production, meticulous in nature.

Start at the title track as your first example. ‘The Maze’ is hypnotically undulating, moving like a boat bobbing up and down on the sea. Helmut then picks up individual elements seemingly by fingertip, placing them under the gaze of microscope onto the track. The descending rave pipe bassline, the sonar plips, every single reversed sample and flourish – nothing here is accidental.

While ‘The Maze’ is full of eyes down mood, ‘Frozen’ is more reverential in tone, feeling it should be played in a club staged in a reclaimed cathedral. The melodic notes in the background move with grace, however the foreground clubbier elements are taut like elastic.

Then, taking a break from the four to the floor, ‘Dolores’ is a dramatic piece of ambient. Poignant key changes and swells of arpeggio harken back to more timeless eras of composition. It’s part classical structure, but also the aesthetic of pulpy eighties sci-fi.

One of the benefits of being in a hot production twosome is the ability to draft in your production partner for remix duties. Nadja takes ‘Dolores’ through two workouts – the club version focuses on those aforementioned shifts in key as the track suddenly finds itself with kick drum propulsion. If we are running with the symbolism of science fiction, then this is the track shifted into the serene galaxy hopping state of warp speed. Then the Lucid Moment take rolls in the breakbeats and brings back into play those dramatic arps from the original.

2 weeks Pre-Order before 29th May Beatport excl. and on Lucidflow.Bandcamp.Com